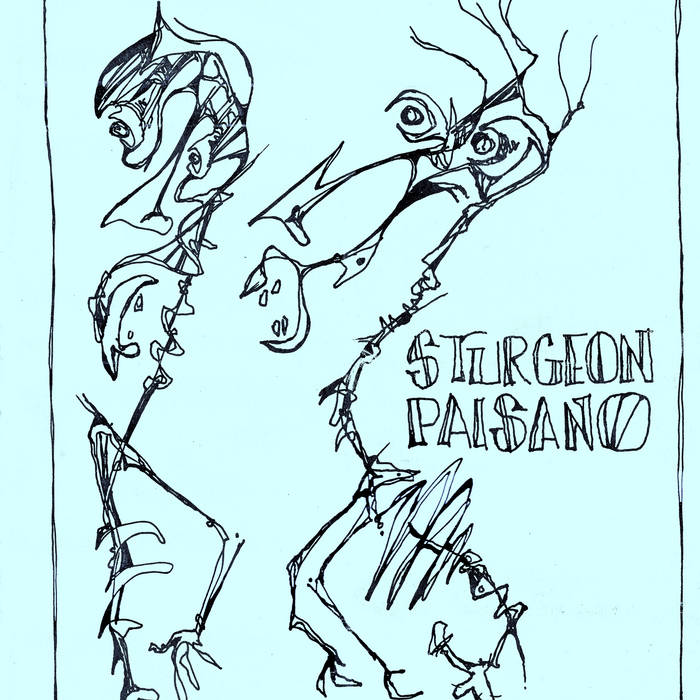 Paisano was the brainchild of Nathan Caskey and Daniel Mitha, two music-loving teenagers living in Kirkland, WA, just across the bridge from Seattle grunge city. Following the discovery of the music of Sonic Youth and the Dead C the pair would deeply immerse themselves into the 90’s underground «experimental» music culture. After catching a few live shows and collecting records, tapes, zines, and distro catalogs compulsively, the duo would eventually try their hands at creating their own kind of noise music. Paisano then began wreaking havoc from Mitha’s family home basement after school and on weekends eventually sending a tape recording of their experiment to Maine-based noise musician Crank Sturgeon. This cassette exchange eventually resulted in the production of the 1996 self-released and hand-made Sturgeon Paisano split tape. Limited to 50 copies, the split was mostly given away to friends and people who, in the band’s own words “were just not interested and didn’t care to keep it around”. Shortly after releasing the tape, Nathan would leave for Switzerland, and by the beginning of the school year 1997, the duo would part ways, leaving for college and ultimately ceasing all of its musical activities.

The downloadable musical material included with this zine is made up of all the music from the aforementioned Sturgeon Paisano split cassette (including Crank Sturgeon’s side!) and more than 2 hours of previously unreleased material. This includes 2 unreleased Paisano tracks, as well as 3 cassettes worth of field recordings, tape collage, sonic études, or various oddities laid down on tape as solo material from Nathan and Daniel during the Paisanic years.


“It’s actually quite nice to know that Paisano continues to generate some listens. I was quite blown away from the first cassette they sent me- mad, grating, anxious work - simply amazing stuff.
It was a pleasure to have shared a tape with them.” -Crank Sturgeon, January 2020

***At least 1$ out of the sale of every copy of this zine will be donated to Taking What We Need. An informal community group dedicated to helping low-income transwomen in Montreal get what they need through discretionary funding.***

-Crank Sturgeon/Paisano: Sturgeon Paisano
Originally released in an edition of 50 copies in 1996.

-Daniel Mitha (Sano): Some Paisanic Soundings in the absence of N.C. (Les parapluies de Cherboug have shielded us from the downpour of noise until a suprisingly young man from Bellevue shed some light to the outer limits of WA.) Previously unreleased, recorded in 1997.
*Track B3 recorded at Anomolous records with Jeph Jerman, Aaron Wintersong and Dave Knott in April 1997