by The Sommes Ensemble 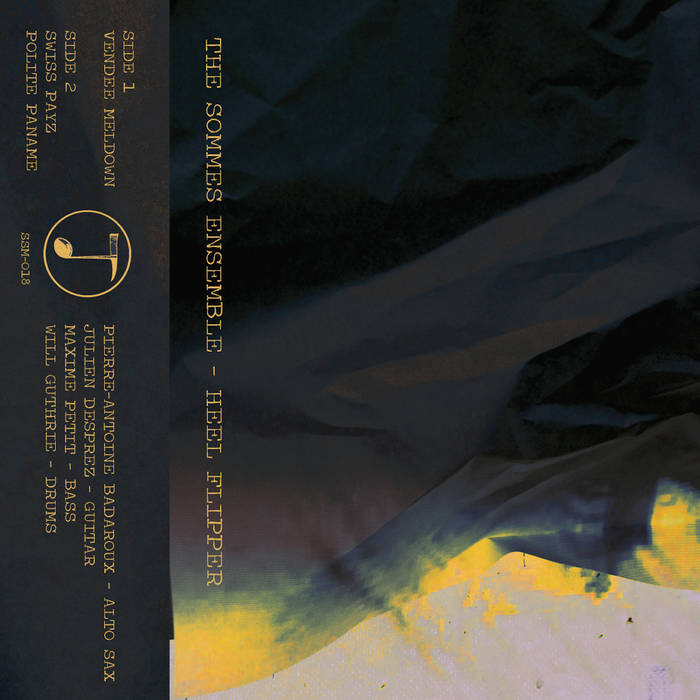 Ryan Masteller - Cassette Gods
The Sommes Ensemble toured Europe in 2015 and 2016. Wanna know how I know that? “Heel Flipper” is the result, a document of the “strategic, organized chaos” the quartet blazed through the clubs they visited. Featuring alto sax, guitar, bass, and drums, the ensemble is an unsightly smear of fusion and free jazz and free-form freakouts, a perfect signing for Montreal’s Small Scale Music, a purveyor of the strange and the challenging. Whether the Sommes Ensemble is blasting out shards of anti-jazz or stirring a sonic cauldron of audio witches’ brew with the deepest restraint (we are on the cusp of Halloween as I write, after all), the result is never less than captivating. Or visceral. Definitely visceral, what with all the shredding and slashing and other instrumental violence wreaked upon (probably very willing and totally primed) audiences. You can hear the musicians’ skin lacerating and the blood pouring as they play, such is the intensity of performance. The unholy bacchanal of arterial spray surely whipped their audiences into frenzies so uninhibited that old Freddy Krueger himself would blush if he heard it (and if he had facial skin). But what makes “Heel Flipper” much more than just a live document is the inventiveness and the singular in-the-moment clicking of personalities. The energy is beyond palpable – it’s mesmerizing, and it penetrates you like old Freddy Krueger’s knife hand, scrambling your equilibrium as if it were opening an irreparable chest would. But of course everybody left the Sommes sessions unscathed, and probably more than a little keyed up. But mostly happy, at least until their next brush with violent death at the hands of a fictional monster… Or their next Sommes Ensemble show. Boo! Halloween… -
cassettegods.blogspot.com/search?q=sommes+ensemble

Ed Pinsent - The Sound Projector
Quite nice Canadian free jazz-improv-noise by The Sommes Ensemble on their cassette Heel Flipper (SMALL SCALE MUSIC SSM-018). The team of Pierre-Antoine Badaroux (alto), Julien Desprez (guitar), Maxime Petit (bass) and Will Guthrie (drums) seem to aim for a group sound that’s not too far away from post-punk New Wave music of the late 1970s, while still reserving the right to blow free-form flights of energy long into the night. Indeed the whole of Side A is occupied by a single piece ‘Vendee Meltdown’ on which they never run out of gasoline for the whole nine yards, and keep audibly bouncing about the stage as though they were set on top of a hot-plate in bare feet. Particularly nice is the slightly chaotic edge and blocky outputs supplied by Desprez’s electric guitar, which can be both discordant in melody and surly in tone, not concerned with crowd-pleasing sweeteners. This long piece takes a breather about midway and starts extending into long tones, blasts, and heavy sighs, yet while arguably slower in pace is still laced with a lot of power. Two other examples of their craft, ‘Swiss Payz’ and ‘Polite Paname’ occupy the flip, and it’s by now one notices the bassist and drummer getting their licks in with a single-minded commitment to simplistic, repetitious riffage, which I find very enjoyable. The soloists can’t help joining in, and when they do it’s more like some teenagers in a punk-thrash garage combo rehearsing, than “art” music; as such we like it fine. “Strategic, organized chaos” is their own way of describing this spiky, insistent stuff. - www.thesoundprojector.com/2018/02/06/canadian-heels/

Vital Weekly:
The Somnes Ensemble from France is a quartet of Pierre-Antoine Badaroux (alto sax), Julien Desperez (guitar), Maxime Petit (electric bass) and Will Guthrie (drums, percussion). Their cassette, released by Montréal-based label Small Scale Music consists of three tracks: ‘Vendee meltdown’, ‘Swiss Payz’and ‘Polite Paname’. All three tracks are recorded on live occasions in the years 2015-2016. Badaroux is a Paris-based alto saxophone player, composer and producer. Also Desprez is a musician and performer based in Paris who moved from playing jazz and rock to free improvised music. Petit is bass player since 1984 and has a history in punk and free noise bands. Guthrie is an Australian drummer living and working in France, and initiator of this ensemble. The energy of the ensemble is clenched in nervous and noisy excursions. Their dynamic free rock breathes a punk attitude and made me think of the projects by Luc and Terry Ex. Combing repetitive patterns with free playing. Their improvisations and playing are very concentrated, tight and effective. There is no escape! They offer fine intertwined playing, with nice answer-response sections. It all sounds very fresh and totally convincing. Great work! (DM) - www.vitalweekly.net/1100.html